There has been war of words between Reno Omokri and the Idimi Family of Borno state.

Recall that billionaire Femi Otedola donated the sum of 5 billion naira to support impoverished children in the north.

This gesture prompted activist Reno Omokri to lambast the Idimi family, calling them out for displaying obscene wealth in the midst of abject poverty.

Reno’s  comments did not go down well with the Indimi family who wasted no time in responding to his  criticisms.

Dear Indimi Family,I saw your post attacking me. You shouldn’t see my criticism of your obscene display of wealth in the midst of the extreme poverty surrounding you as hate, neither should you see my opposition to your powerful in law, General Buhari, as bitterness.

That is rather petty. Opposition is a vital part of democracy, and I am not asking you to do what I have not done. I hate to do this.

I would prefer to keep it private. But since you challenge me, please find attached a picture of an orphanage I built with my hard earned money to house orphans from Borno IDP.

Yet, I am not from Borno. I have also travelled to 36 countries so far in 2019, campaigning for #FreeLeahSharibu, a native of Borno, where you come from.

I don’t have one percent of one percent of your wealth. You can’t be flaunting private jets and spending hundreds of millions when you are surrounded by the worst poverty on planet Earth and expect not to get called out!

There are millions of internally displaced people in Borno. If indeed you guys are doing something, we will see it via the IDPs. Shut me up by making a difference to their lives! #TableShaker

Responding to Reno’s last attack on their family,  a member of the Idimi family  Rahma shared a screenshot of a UN invitation letter sent to them and wrote;

Dear @renoomokri I regret ever responding to your silly rant. Nope, we have nothing to prove to you and nope we will not stoop to your level again.

As you can see we are busy doing what we need to do and I’m extremely satisfied that the international community has seen our efforts and being rewarded for it is all I can ask The Almighty Allah for.

Alhamdullilah. I never should have responded, my response is Allah ya isa Duniya da lahira. That is more than enough. In the mean time, we will do as much as we can and will do it quietly in Sha Allah . 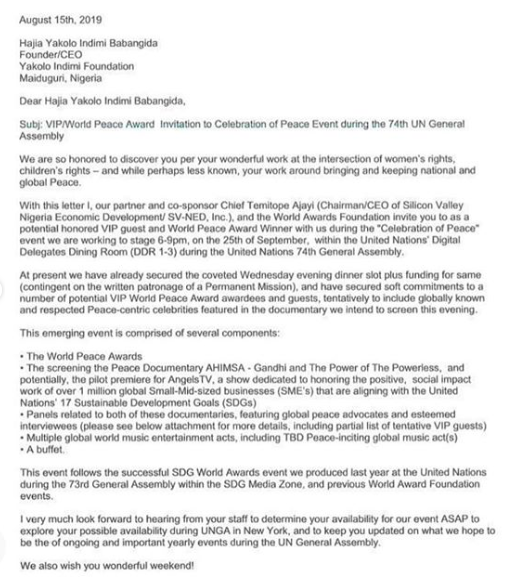 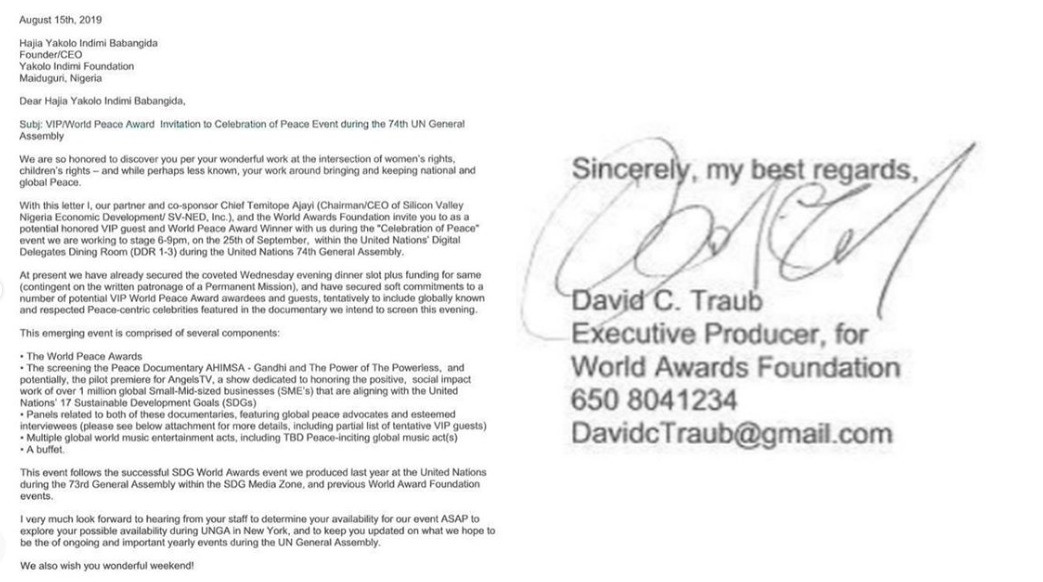 You claim the international community sees what you‘re doing. Of course. They saw your million dollar donation to a US University that is already a multimillionaire and didn’t need the money. Stop throwing tantrums. Go and feed your starving masses!

The wealth you flaunt can feed the IDPs around you, 1% of your wealth can close down ALL the IDP camps in Borno. You lavish hundreds of millions on parties we see on Ovation and LIB and you call me SILLY? Look in the mirror. Pity your own people.

You live in OBSCENE WEALTH in the midst of EXTREME POVERTY. That is why poor peasants around you feel that book (Boko) is HARAM, because it has produced your sort of wealth. The wealth that SWALLOWS while the poor WALLOW. Learn from@realFemiOtedola.

Truth is hatred to those who hate truth. Go and eat INDOMIE and ponder on the truth l I told you. How do you think Boko Haram started? You cant be flaunting UNIMAGINABLE WEALTH in the midst of UNIMAGINABLE POVERTY and expect the poor not to rise up.